Ancient Greek Food (What Did They Eat?) 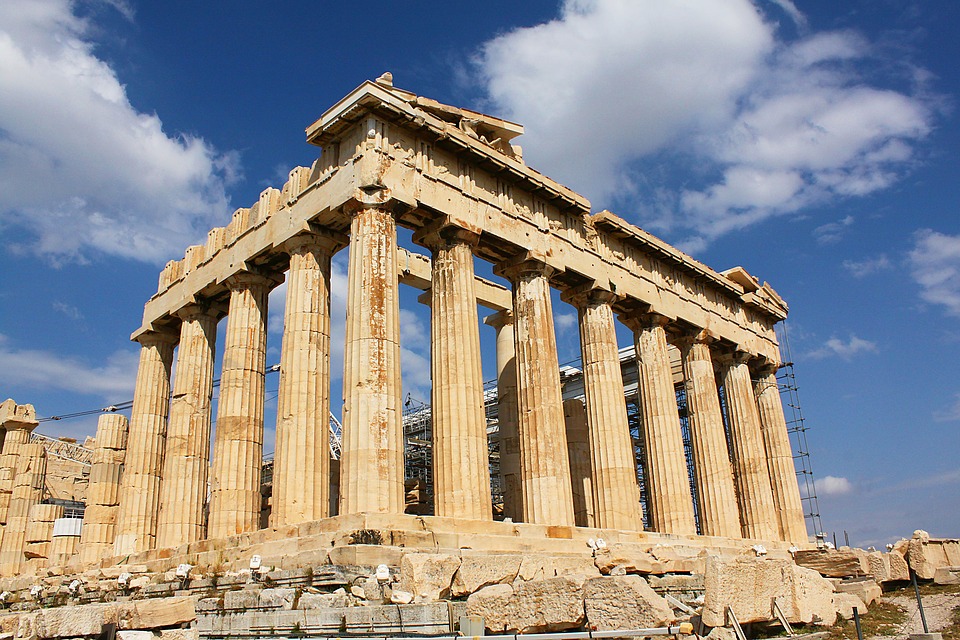 Ancient Greek food wasn’t too much different from the foods we eat today. Of course, the methods of processing food were much different, and the Ancient Greeks had different ways of coming about their sustenance. For example, they may have kept a goat for access to milk and cheese.

There’s been a lot of talk about ancestral diets lately, but our ancestors aren’t just cavemen from the Paleolithic era. Let’s take a look at what our Greek ancestors ate, and compare it to our diets today.

What Did They Eat for Breakfast?

If there were two foods that were easy for the ancient Greeks to come by, they were barley and wine. For that reason, many of these people at bread for breakfast, which was sometimes dipped in wine.

Sound luxurious? Not really. Barley was used to make most of the breads in ancient Greece. Wheat was also commonly used. Imported wheat was softened by soaking, then ground into flours similar to those we use today.

Barley was a bit more complicated, and required roasting, milling, then grinding. Both grains produced breads of a very hard consistency, and it was difficult to eat. To soften the breads, the ancient Greeks would soak it in everyday wine.

Fruits and vegetables were also very critical to the ancient Greek diet. Grapes, nuts and figs were available to them, as well as pomegranates in the cooler months. Sometimes these were consumed with breakfast breads.

One more breakfast food that was relatively common resembled a pancake. It was made from wheat grain, and contained olive oil, honey and curdled milk. Compare it, very loosely, to a buttermilk pancake of today. Often these “pancakes” would be topped with honey or even cheeses.

What Did They Eat for Lunch? 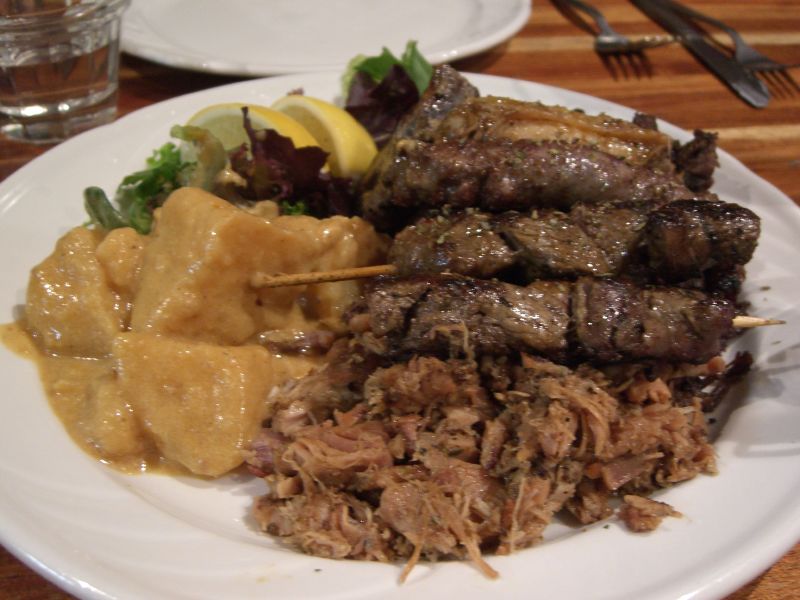 Ancient Greek food usually consisted of three to four meals each day, much like we eat today. Of course, they ate a mid-day meal. They considered lunch more of a snack, so they’d consume more of that wine-dipped bread they had at breakfast.

Studies indicate that a lot of ancient Greeks, by lunch, had consumed more of the wine that they’d had at breakfast by the time lunch rolled around. So they’d supplement their snack with fruits like figs, salted fish, and more breads. They are also known to eat cheeses and olives with their lunch.

Olive oil was and remains a staple of the Greek pantry. Soups were often made, combining veggies with vinegar and sometimes fish, and at times these were eaten at lunch. A majority of the heavy meals were reserved for supper, though. The ancient Greeks grazed throughout the day until it was time for dinner.

What Did They Eat for Dinner?

Have you ever heard that breakfast is the most important meal of the day? That may be true if you’re watching your weight. But in ancient Greek culture, supper was the most important. It was more a time of comradery than nourishment.

Women and men frequently ate separately – first the women, then the men. If there were slaves, those people ate last. For the most part, the Greeks were vegetarian. Meat wasn’t easily procured, and only the wealthy had access. The exception was fish – most ancient Greeks incorporated fish into their diets.

Some ancient Greeks were hunters. Bird and rabbit were sometimes eaten at the largest meals. Only the most wealthy of the ancient Greeks had the money and the real estate to raise livestock. Sausage, however, was common to both wealthy and the less so, and piglets could be purchased at the markets relatively inexpensively.

Eggs were eaten at dinner, both from chickens and quail. As with the other meals, wine and bread was served. Soups and stews weren’t uncommon, and legumes grew easily in ancient Greece. 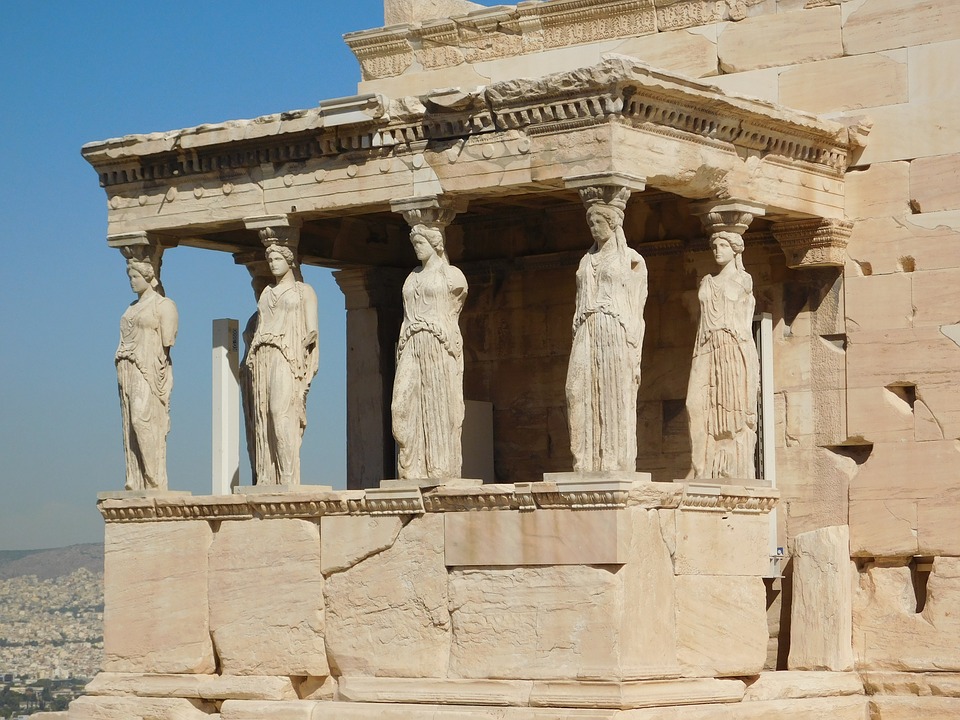 Dessert – the best part of the day! You may recognize some of the treats ancient Greeks ate after their supper. For example, we still drizzle figs with honey, sometimes after stuffing then with feta.

Sometimes the ancient Greeks would also hard boil or soft boil goose eggs and serve them as a dessert; they were valued for their rarity. But fruits and nuts were the most commonplace of desserts. Fruit would be served fresh or dried, and nuts would be served with honey or plain.

Ancient Greek Food and the Foods of Today

Some of the ancient Greek food traditions carry over to the foods we eat today. And what used to be a localized diet is now a global one. Baklava, for instance, was served in ancient Greece. And while the recipe is much different today, the principle of the staple remains the same.

Another taste tradition that’s been carried down since ancient Greek times is black soup. In fact, this soup is common throughout much of the Mediterranean. These dishes are created by seasoning and cooking the blood of pigs, and can be made into sausage or eaten on its own with maza, balls made of barley flour.

Agriculture in Greece has changed over the centuries, but the climate has remained the same. Because of this, there are foods which were used in ancient Greek food that are still popularly used in recipes today. Olives are an important component of Greek agriculture. Grapes, and subsequently wine, are also a critical export. Melons, tomatoes and peaches also grow in Greece.

Today, Greece is more known for its cotton and tobacco farming. But the livestock sector is a large part of the Greek economy, and that carries over to the Greek diet. Unfortunately, the waters surrounding Greece and its islands have been overfished in recent years, and fishing isn’t as important as it once was. But goats and sheep are critical even now.

The ancient Greek diet was simple. Much of it was created from necessity and availability. But a lot of the foods which were served then have influenced the dishes we eat today.

Author: admin
Filed Under: Food of the World
Ancient Roman Food (What Did They Eat?)